As they docked, Trillian immediately noticed the warm hues of various colored wood.  The buildings were designed in a pattern of wood and stone Trillian had never seen before.  The scent of wood surrounded them in a pleasing way the ranger found comforting, but something else had caught his attention.  In the sky there were several contraptions floating about in the air.  Remembering Yulissa’s warning to not stare, he tried to divert his eyes from the phenomenal sight, certainly noting to ask the woman about it later.

Yulissa directed them through the winding docks and into the city.

The people wore strange clothing Trillian was unfamiliar with.  There were laces on every piece of outer clothing.  The women wearing constricting contraptions that laced over top of their ruffles, and the men wearing lacing vests and various hats.  Even their shoes laced, which was not uncommon for some boots, but all shoes?

A few of the passers-by wore strange goggles, and every last motorized contraption had a series of metallic spokes all working in unison, causing them to move.

Such miraculous and odd things Trillian had never seen before, and he tried exceptionally hard to keep from staring as they passed one after the other.

His black outfit seemed to blend in, though he was without laces and vests.  Yulissa had changed into one of these strange outfits the other women were wearing, though Trillian hadn’t noticed until now.  Her skirt was shortened in the front, and dipped to the ground in the back, fluffed in ruffles.

“Fluffed seems an appropriate word.” Trillian thought to himself as they rounded a street corner and walked into a building.  The glass doors were also new and strange to Trillian, being able to see into most of the buildings through large storefront windows, and their similarly designed glass doors, all framed in wood.

“Hello!”  Yulissa called out, walking to the front desk.

“Just a moment,” a muffled cry came from somewhere behind the curtain spanning the doorway behind the counter.

Trillian wondered if this were a good moment to speak, and looked to Yulissa.  “Where are we?”

The woman held her hand up, shaking her head briefly.

A comical sort of man emerged from the back, his vest in brightly colored patches, while his unkempt white hair splayed about his shoulders, circling round his balded head.  He had a pair of strange large goggles on his head, with smaller circles of glass stacked on one another on one side.

“Yulissa, my dear,” he exclaimed.  “I wasn’t expecting to see you for another two weeks, what brings you back so early?”

“I could use some funds for these, Maxus.”  Yulissa pulled out her velvet bag of treasures, dumping the contents gently on the countertop.  Pieces she hadn’t been able to sell in Severum knowing she’d get a better price somewhere else.  “I haven’t much time, what are these worth?”

The shopkeeper picked them up one at a time, gemstones in various shades and sizes, pendants on golden chains, and a chain of pearls and gold.

Trillian didn’t see any reason to watch as she sold them and began wandering through the shop.  He was fascinated by the amazing things surrounding them.  Various decorative pieces, candelabras and smaller candle stick holders, unique sculptures crafted from metal and those strange spoked circles, what seemed houses for birds with numbers on small circular faces and tiny arrows that pointed to the numbers, hung staggered along a wall behind a counter.  More wooden and glass boxes containing the same circle and number pattern sat on the glass counter top, with even more various styles of them down inside the glass counter.

He’d never seen so many knick-knacks and decorations all in one place.  He knew smiths who could create such pieces, and Severum had oil lamps, but nothing quite like the lamps he saw here.  They had a glowing orb inside of them that seemed to shine by itself.

A few moments later, Yulissa was ready to leave and they were back out into the busy street.  Trillian had also never seen so many people moving about, the people of the city appeared to be free, untouched by darkness.  Trillian wondered what that kind of a life must be like, never worrying for your life or if the dark overlord was going to summon you to punish you for some deed or other.

“When we get to the next place, you can ask all the questions you like, thank you for being so patient.  You’re both doing quite well, I’m impressed, though worry what life at the Severum must have prepared you for.”  Yulissa turned briefly to Trillian, still guiding them on their way.

His lips drew to the side in a brief smile, “It doesn’t differ beyond what you have already seen, in your short visit, I assure you.  However, once in a while Lord Sideon hosts a public execution.”

A sullen shadow visibly passed the woman’s face.  With a gentle, sympathetic smile, “We’re not far. ”  Yulissa continued walking with more purpose to her step.

Trillian knew the concept had made her uncomfortable, himself beginning to wonder what kind of a life this woman must lead to be unaccustomed to the darkness.

Do you like stories with pirates? If the answer is no, then you can leave and go do something else other than read the rest of this.

Have the strange people gone? Yes? Good. Well here we are then.

I wrote a book. It’s an action/adventure/mystery/romance in the theme of fantasy steampunk. Quite a mouthful right? Really it’s just a rollicking good story about our heroine Larissa, her counterpart – a reticent yet highly skilled fighter named Holt – her genius engineer friend Cid, and a cat.

The first book The Machine is where the story starts and really you need to read that before you can read book two, The Pirate. It’s available now for only $0.99 (or equivalent currency in your location), at http://www.amazon.com/gp/product/B01B43XF08.

You go read that now and come back to me here, I’ll wait…

Now that’s out of the way, you want to find out what happens next don’t you? Well lucky you. Book 2, The Pirate is out on 29th February. The same team are off on yet another adventure. Poor Larissa has a bit too much to handle on her plate, and now that she has become the Captain of the pirate airship all responsibility falls squarely on her shoulders. I do like to torture my poor characters. It’s good for them (at least that’s what I keep trying to tell them. I’m not sure they agree.)

The story is fast paced, action packed, funny in places and a compelling page-turner. There’s never a dull moment in my books because who wants to write/read dull stuff? Not me, and presumably not you either.

Here’s a little sneak peak for you:

“Not wanting to slaughter your way off the ship today, huh?”

“These men are only following orders.” Holt cast a wistful glance up the stairs. “Most of them, anyway. Set the next fuse when we get to the mid-deck and leave it in the staircase so the explosion doesn’t catch any of the black powder. The last two we’ll light when we’re about to get up top. How do we get off?”

“It’ll be there,” she tried for reassurance as she held the bomb with the longest fuse up to a gas lamp to light it. She wasn’t sure if she was trying to convince Holt or herself.

Holt gave a grunt in response. It was not a grunt of approval.

“You think you can make it with those still attached?” she asked, pointing to his chains.

“Too late to worry about that now.” He nodded at the bomb.

Larissa jumped a little as she suddenly realized that the clock was ticking. She rushed to the middle of the corridor and placed the small bomb through the bars of one of the cells and chanced a quick glance at her pocket watch.

“Five minutes,” she whispered, heading back to Holt, who’s already started up the stairs. He’d collected a short-sword from the Captain and carried it in both his hands. Larissa would have doubted the ability of most men to be effective being so restricted. Holt was not like most men.

“What if we see people?” she whispered as they ascended.

“There are sixty-two men aboard. I would find it odd if we did not see anyone.”

“I mean what do we do if people see us?”

He turned back and cast an appraising glance over her. “Do not let people see you.”

Did that catch your attention? I hope so. If it did then you can order your copy here. 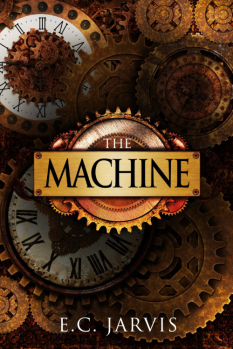 Let me know what you think if you read them. You can find me any number of places: 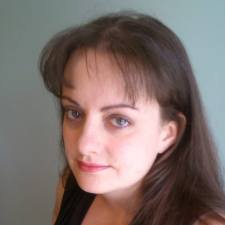 E.C. Jarvis is a professional bean-counter (accountant) and semi-professional word spewer (author). She once got the two confused – it was not pretty. Born, raised and currently living in England. Over the years, E.C. Jarvis has managed to accumulate a husband, a daughter, and a cat.

© Dana Woods and onlybyyourblood, 2012. Unauthorized use and/or duplication of this material without express and written permission from this blog’s author and/or owner is strictly prohibited. Excerpts and links may be used, provided that full and clear credit is given to Dana Villa-Smith and onlybyyourblood with appropriate and specific direction to the original content.